Facts about the current safety standards: 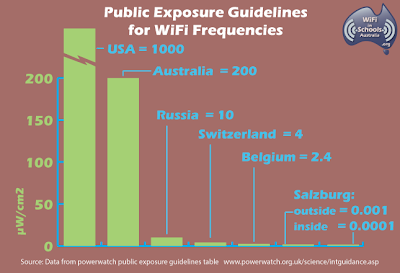 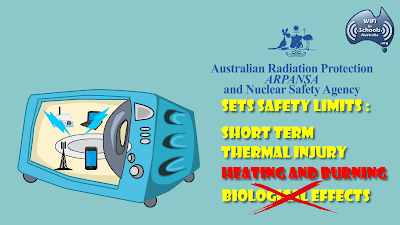 Contradictions in Official Advice
There is a plethora of contradictory and out-dated information available on RF standards which fuel confusion or a false sense of complacency amongst parents, education authorities, decision-makers, and the wider community into thinking that wireless technology is totally harmless.  The ubiquitous nature of wireless technology into all areas of our lives deludes us into assuming that this technology must be safe and the risks have been well evaluated.

The ambiguity of the language and the perversion of words are apparent in publications and literature produced by the various agencies tasked with informing the public about the safety standards.  Consequently, the same literature can be used to argue either for or against taking a more precautionary approach depending on the individual’s or authority’s stake in the decision.

Although ARPANSA’s official position stating that the weight of the scientific evidence does not show an association between exposure to RF and adverse health effects, their numerous fact sheets keep providing ‘tips’ or advice on how to exercise caution to reduce unnecessary exposure.  For example, fact sheet 14 states, “Due to the lack of scientific evidence on mobile and cordless phone use by children, ARPANSA recommends that parents encourage their children to limit their exposure... Many other household wireless devices use RF EME to communicate, including wireless computer networks.”

The response letter from ARPANSA about fact sheet 14 states, “The advice provided on fact sheet 14 is not intended as an official recommendation to adopt the precautionary principle for children using mobile phones and other wireless devices but rather to provide practical advice on ways of reducing exposure to RF EMR from these devices for those who wish to do so.  ARPANSA has previously recommended in fact sheet 13, that "given the lack of any data relating to children, that parents encourage their children to limit their exposure to RF EMR from using a mobile phone against the head."

ARPANSA’s fact sheet 13 also states, “some research has indicated that non-thermal effects resulting from low-level RF exposure may also occur.  However, the existence of these effects and their implications has not been sufficiently established to allow for them in the Standard.”

This document provides the rationale and support to WHO’s working document “Dealing with uncertainty: how can the precautionary principle help protect the future of our children?”  It states, “When solid science is available, health can be protected effectively through preventive action. However, people must humbly acknowledge that science has limitations in dealing with the complexity of the real world and do their utmost to promote the development and progress of science. While people strive for better science, how can health be protected? In particular, how can people ensure that children and future generations will have the opportunity that many people have of reaping the benefits of progress and enjoying good health?"

This WHO document cautions on the grave consequences of failing to act in a timely manner as was the case with asbestos and tobacco.  In an effort to protect children and future generations this WHO document outlines a scientific, ethical and public health approach to applying the precautionary principle. Included in the report are scientific tools for identifying uncertain and complex risks, linking these with tools for cleaner production and innovation in safer technologies and activities.


IARC Classification, ICNIRP and the WHO Precautionary Principle Document
The WHO/IARC 2011 classification of radiofrequency electromagnetic fields as “possibly carcinogenic to humans” means that all wireless technologies are now considered as a possible cancer causing agent - and not just mobile phones.  This classification also justifies the implementation of the precautionary approach according to the EU document, ‘Communication from the Commission on the Precautionary Principle.”  In his Washington Times Communities column, scientist Dariusz Leszczynski explains the implications of this classification in relation to mobile phone radiation, and the justification for adopting the precautionary principle as outline in this EU document.

The same contradictions and ambiguity evident with ARPANSA are also apparent with ICNIRP who ARPANSA follow.  ICNIRP’s opinion is that non-thermal effects are not proven and that they are unlikely to exist. However, as highlighted by Dariusz Leszczynski, “the IARC classification contradicts this opinion and indicates that non-thermal effects exist.”

Furthermore, despite this position taken by ICNIRP, the ICNIRP document “General Approach To Protection Against Non-Ionizing Radiation Protection” also states, “Different groups in a population may have differences in their ability to tolerate a particular NIR exposure. For example, children, the elderly, and some chronically ill people might have a lower tolerance for one or more forms of NIR exposure than the rest of the population. Under such circumstances, it may be useful or necessary to develop separate guideline levels for different groups within the general population...Some guidelines may still not provide adequate protection for certain sensitive individuals nor for normal individuals exposed concomitantly to other agents, which may exacerbate the effect of the NIR exposure...”

Given these gaps in scientific understanding, the WHO/IARC classification and the EU document, it is now of paramount importance to adopt the precautionary principle and especially where children are concerned. Under present conditions of uncertainly and ignorance, the WHO document provides an approach to guide decision-making in preventative public health measures, especially in areas of emerging concern about the environmental impact on children’s health and that of future generations. The chapter, “Applying the precautionary principle in environmental risk assessment to children” also addresses the shortcomings in traditional risk assessment and shows the importance to incorporate the precautionary principle to effectively protect children’s health.

As stated in this WHO document by Roberto Bertollini, Director, Division of Technical Support, Health Determinants, WHO Regional Office for Europe, “If used intelligently, imaginatively and daringly, the precautionary principle will support efforts to strive towards a healthier and safer world.”


CSIRO legal case and CSIRO Report
In February 2013, for the first time in Australia, the Administrative Appeals Tribunal of the Australian Federal Court legally recognised the health effects of electromagnetic radiation.  In this workplace compensation case, the Tribunal found that Dr McDonald suffered a workplace injury of a worsening of his sensitivity to EMR, since he was required by his employer to trial electronic equipment.  Dr McDonald was employed as a senior research scientist at Commonwealth Scientific and Industrial Research Organisation (CSIRO).

What is ironic about this landmark case is the fact that the employer was CSIRO.  In 1994 the CSIRO Report (Barnet Report) presented the status of research on health effects of electro-magnetic radiation at frequencies relevant to telecommunications.  This report illustrated that subtle biological effects were reported at exposure levels where gross thermal change could not be attribute as a cause. The recommendations stressed the urgent need to investigate the biological effects and advised that "only when a solid data base of independently verified quantified bioeffects is available will meaningful safety standards be developed and reassurance of the public be achieved".  Back in 1994, it highlighted the high level of what was not known about the effects of RF exposure, yet wireless technologies continue to be expanded without biologically based standards or implementation of the precautionary principle.


Emerging Technologies and Scientific Worldviews
With the exponential increase in the development and use of non-ionising radiation technologies, no doubt there will be many more cases like the McDonald case if the precautionary principle is not urgently adopted and the biological implications well researched. The increase in reported symptoms by affected people also warrants research to fill the gaps in scientific understanding. A potentially massive public health crisis currently exists due to the number of people now exposed to elevated background RF radiation levels.

“We should stop telling the science, politicians and general population that Wi-Fi is harmless...We should better be honest and say that “we do not know what long-term effects might be.”  (Markov, M and Grigoriev, YG, ‘Wi-Fi technology- an un-controlled global experiment on the health of mankind’).  If we acknowledge this fact, then perhaps collectively we may be able to consciously redefine how we want to use technology in a safe manner.

“Man has built into his complex artificial environment the tools with which, if he chooses, he can destroy civilization and possibly himself.” (The Making of Civilization - history discovered through archaeology, Whitehouse and Wilkins). If history is not to repeat itself as it has time and time again, we need to urgently bring some mindfulness into our unconscious use of technology.

Since technology is now advancing at a phenomenal pace, scientific paradigms need to also shift to help humanity transition through these changing times, and to help technology work for humanity.  For example, a physicist from the Swedish Institute of Space Physics and a team in Italy have proven that it is possible to simultaneously transmit multiple data channels over exactly the same wireless frequency using a vortex radio technique. Vortex radio waves could boost wireless capacity to transmit an almost infinite number of WiFi, phone and TV channels at the same time, over the same frequency.

Discoveries like these are poised to have a profound effect on wireless communications and could potentially impact on health and the environment in a massive way.  Therefore, if our current outmoded model of mechanist, material science in setting today’s exposure standards are criticised as inadequate, how can they accommodate increasingly new technological innovations that are based on quantum principles?

Since the conventional scientific model is based on a mechanistic, reductionist way of thinking, this view is also applied to the complexities of human biology. However, in order to explore the uncertainties about the biological impacts of EMR, surely we need to look for ideas and answers outsider the core discipline of engineering practices, and include cross-disciplinary fields.

In anticipation of emerging and future developments, a substantial number of scientists are increasingly supporting and developing a paradigm shift away from the primacy-of-matter to a new perspective based on quantum physics.  Pioneers of quantum physics like the late John Wheeler, a Princeton physicist and colleague of Einstein, have shown through experiments that the observer influences what is being observed. The act of looking at something as tiny as an electron changes its properties to behave either as a particle or a wave, depending on the observation method.  Such findings support the quantum perspective that we can no longer consider ourselves as mere spectators who have no effect on that which we are observing.  “Despite the fact that quantum physics changed the perception of reality and science over 80 years ago, it has yet to be incorporated into the conventional biological model” (Senior Scientist, Dean Radin).

If we become more conscious of our effect on the quantum process and how it is coupled to physical reality, how it effects and transforms physical reality, and our actual experiences, we can become more effective in shaping our processes so that they lead to greater well-being and better decision-making.

If the man-made EMR we've created is here to stay, and we are increasingly being seduced or forced to use wireless technologies in all areas of our lives, then we urgently need to seek new vistas to help develop more protective safety standards.  We need to overcome the limitations of conventional science, the division of worldviews, and expand research into the realms of frontier science like quantum physics, quantum biology, epigenetics etc that could help provide the answers.

“All things are connected... Man did not weave the web of life, he is merely a strand in it. Whatever he does to the web he does to himself.” (Chief Seattle/Ted Perry)

A small shift in perception could prove to be a giant leap for humankind, if we move from seeing ourselves as separate from the world and other people, to seeing ourselves as part of the world, interconnected, and interdependent.  Such a worldview would also highlight the urgency to implement the precautionary principle in the interest of protecting all biological life on this planet.


We’re all in this together! 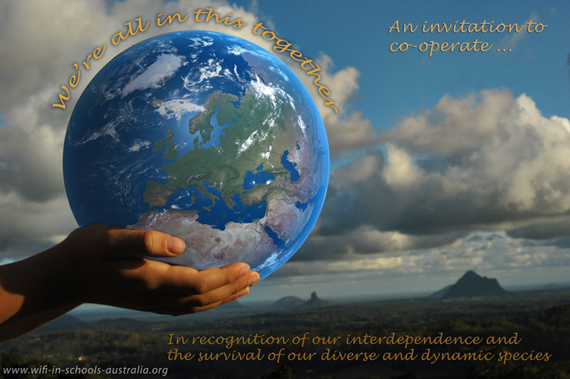