As highlighted by the Council of Europe there have been scientific and medical studies since the 1930s which has revealed biological effects from radio frequencies and microwaves from radar.  The late New Zealand physicist and meta- analyst Dr.Neil Cherry studied over 600 researchers worldwide.  He was surprised to learn how much published science existed since 1959 which showed damage to cellular DNA and cell function, reduced melatonin, increased brain cancer, etc at levels below current safety limits.   In June 2000 he was invited to a European Parliament Conference to present evidence of adverse health effects from EMR and any epidemiological evidence showing what exposure levels could be safe.
Click here to view Dr. Cherry's research

Australia CSIRO 1994
As early as 1994 Australia’s CSIRO reviewed worldwide research on the effects of radio and microwave frequencies on the human body.  The report of this review was authored by Dr Stan Branett from CSIRO’s Radiophysics Division.  The 150 page CSIRO report listed many well documented adverse biological effects from exposure levels well below the current safety limits.  The report stressed the need to investigate the biological effects to ensure public safety in a rapidly developing wireless technology market.
Although early reports such as CSIRO’s have highlighted the potential risks and the high level of what is unknown about radiofrequencies on the human body, untested wireless technologies continued to be developed and introduced into all areas of our daily lives.

Australian Joining the Dots’ Report 2007
The ‘Joining the Dots’ Report commissioned in 2007 by the Australian Democrats matched the increase in illness since the explosion of wireless technology to the published research into the effects of low level microwave radiation on human health. This report confirms that an increase in illness was predicted as wireless infrastructure was being rolled out in the early 1990s.

Across the globe
There  are  thousands of  studies  showing biological  effects  from  electromagnetic  radiation  at  exposure  levels  far  below  where  heating  occurs  (non-thermal effects). It is glaringly obvious from reading these studies that there is significant evidence of EMR’s biological effects and the scientific evidence has been mounting over the years.

Below are a few key appeals, resolutions and reports from about the world.


BioInitiative Report 2012
The BioInitiative Working Group produced a new report with updates since 2007 on 1800 new scientific studies, public health, public policy and the global response to the growing risks from EMR to billions of people on the planet.
The report was done independent of governments, industry bodies or professionals.   It provides solid scientific evidence, public health assessment and a rational for a biologically-based exposure standard for low-intensity EMR. It states, “There is now much more evidence of risks to health affecting billions of people world-wide. The status quo is not acceptable in light of the evidence for harm.”

New warnings have been issued on wireless and EMR and the effects of wireless classrooms on children, it states, “While we aggressively investigate the links between autism disorders and wireless technologies, we should minimize wireless and EMF exposures for people with autism disorders, children of all ages, people planning a baby, and during pregnancy”.

May 2011 the World Health Organisation (WHO) International Agency for Research on Cancer (IARC), classified all radio frequency electromagnetic fields as a (class 2B) possible carcinogen to humans.  This covers all radio frequency emitting devices, including mobile phones and WiFi.  DDT, dry cleaning chemicals, lead, pesticides, and engine exhaust are among other agents categorised in this same class. 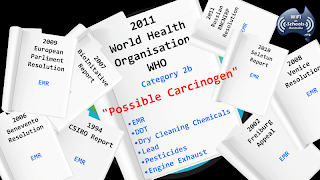 In 2011 The Parliamentary Assembly Council of Europe Resolution  on the Potential Dangers of Electromagnetic Fields and their effect on the Environment was released.
It stated that “telecommunications and mobile telephony, appear to have more or less potentially harmful, non-thermal, biological effects on plants, insects and animals as well as the human body, even when exposed to levels that are below the official threshold values.”  This resolution expressed special concerns for the protection of children and electrosensititive people and there are also very good recommendations included for WiFi, mobile phones, cordless phones, wireless baby monitors, etc.

Some key points include:


RNCNIRP Resolution 2011
The warning was intensified again in 2011 in the Resolution entitled “Electromagnetic fields from Mobile Phones:  Health Effect on Children and Teenagers”.  The statistics presented are alarming and clearly shows the need for immediate government action to help prevent extensive damage to children from the use of wireless technologies.

2007 BioInitiative Report
A group of scientists, researchers and public health professionals produced the BioInitiative Report. Over 2000 studies showing health impacts from EMR below exposure limits were analysed. The findings showed that it is not in the public’s interest to wait to take proportionate, precautionary action.  It outlined the need for new biologically based safety standards, new approaches to educate decision-makers and the public about sources of exposure and for alternatives that lower the risks that currently exists.


2006 Benevento Resolution and 2008 Venice Resolution
In order to conduct independent research and recommend precautionary mechanisms based on biological effects, a significant number of leading scientists and researchers came together to establish an organisation called International Commission for Electromagnetic Safety.  They published resolutions for much stricter guidelines and legislation in 2006 Benevento Resolution (download here) and 2008 Venice Resolution (download here).

2002 The Freiburg Appeal was signed by thousands of doctors and medical professionals who believe that wireless radiation poses health risk.  This appeal came about as a result of observing a relationship between the onset of symptoms and disorders and the start of radiation exposure. They saw a steady increase in allergies, skin problems, pain syndromes, susceptibility to infections, high blood pressure, cardiac arrhythmias, metabolic disorders, and multi-system disorders and were compelled to warn of the dangers. 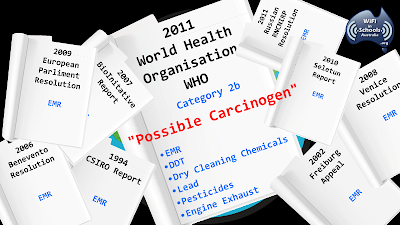